There’s no shortage of options out there for investors looking to capitalize on the oil crash. We here at Wyatt Research have discussed the oil and gas “supermajors” and small-cap opportunities. 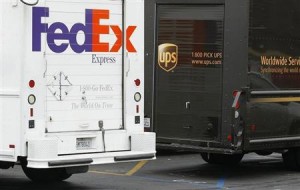 I’ve even called attention to MLPs, which are misunderstood in that they make money from the volume of oil moved and not the price of oil.

In any case, some investors are trying to call the bottom in oil prices by investing in oil and gas companies. Other investors are looking at industries where low oil prices will be a benefactor, such as the airlines.

Within that group of companies that will benefit from low oil prices are the air freight and transportation operators. It’s intuitive when you think about it: United Parcel Service (NYSE: UPS), the world’s largest package-delivery company, operates over 100,000 vehicles, which means a lot of fuel usage.

The other reason to like the freight companies is that they will have other tailwinds from lower fuel costs. Consumers are will be saving money thanks to low gas prices, which means they’ll have more discretionary money to shop online.

On the surface, FedEx Corp. (NYSE: FDX) looks like the best investment in the freight industry. On a valuation basis, it trades at a discount to UPS and the rest of the industry, plus it has a pristine balance sheet. FedEx trades at a price-to-earnings ratio of 19.7%,  based on next year’s earnings estimates, compared to 21.3% at UPS.

One of the big reasons the market considers FedEx a great play on low oil prices is that its fuel expense (as a percent of revenues) is larger than fuel expense at UPS. FedEx spent 8.8% of its revenues on fuel in the most recent quarter, versus 6.8% for UPS.

But in the FedEx vs. UPS battle, studious investors may find that UPS is a more compelling investment. That because superiority of UPS in terms of operational efficiency will more than offset any extra gains that FedEx recognizes from lower oil prices.

FedEx and UPS do have comparable asset bases and generate large amounts of revenues.  FedEx does carry a lot less debt (see chart below):

But there’s a stark contrast in terms of how efficient each company is in terms of using its assets to generate income. Here are some efficiency metrics to chew on:

Notice that while UPS does carry a lot more debt, it’s still generating outsized returns compared to FedEx. UPS’ return on invested capital, which takes into account its debt load when calculating how much money the company generates in relation to its capital base, is nearly double FedEx’s.

As mentioned, UPS does trade at a premium valuation in relation to FedEx, but that’s the historical norm. The premium to FedEx will continue, just as UPS continues to leverage its size and network effects. It’s a much more efficient operator.

UPS generates better returns on its assets and capital base as it has an integrated network — it uses the same network for ground and express deliveries, while FedEx tries to operate two separate networks.

What’s more is that now could be a great buying opportunity for long-term investors. Shares of UPS are down nearly 10% over the last week after offering disappointing earnings guidance. The company lowered its fiscal 2014 outlook due to higher-than-expected personnel expenses during the fourth quarter. UPS upped its personnel during the fourth quarter in order to avoid the bottleneck issues that it experienced during the 2013 holiday season. In any case, it’s not a fundamental issue. And with the recent selloff, the UPS dividend yield is up to 2.6%, compared to FedEx’s 0.5%.

In closing, the FedEx vs. UPS battle really isn’t a battle at all. In the freight industry, size matters; UPS has size and strength. And its large network provides for a large economic moat. Meanwhile, it’s also one of the best income opportunities for investors looking to capitalize on low oil prices, as it offers a 2.6% dividend yield.