Eating healthier is more than just a fad. Indeed, a cultural shift is underway.

This shift has created an environment in which a company like McDonald’s (NYSE: MCD) has been put on its heels and forced to play catch up to competitors like Chipotle Mexican Grill (NYSE: CMG) and Panera (Nasdaq: PNRA).

The charts tell a bit of a mixed story when it comes to fast food. This chart compares McDonald’s to Panera and Chipotle over the past year. Clearly Chipotle stock has left McDonald’s in the dust. But Panera has struggled even more than the 74-year-old fast food giant.

Over the past year Chipotle is up around 64% while McDonald’s is down around 1% and Panera is down around 14%. Since the S&P 500 has returned around 18% during that time, only Chipotle has been able to beat the market. 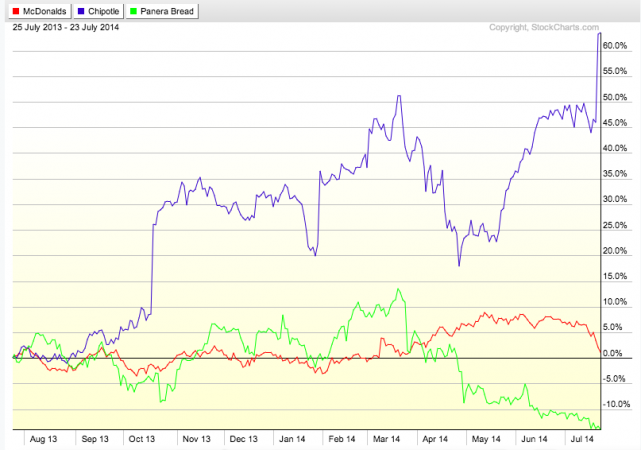 Unless you were able to participate in the Annie’s IPO and enjoy its 89% first-day pop, buying Annie’s instead of Kraft has been a losing proposition. The chart below compares the two stocks since the day after the Annie’s IPO. 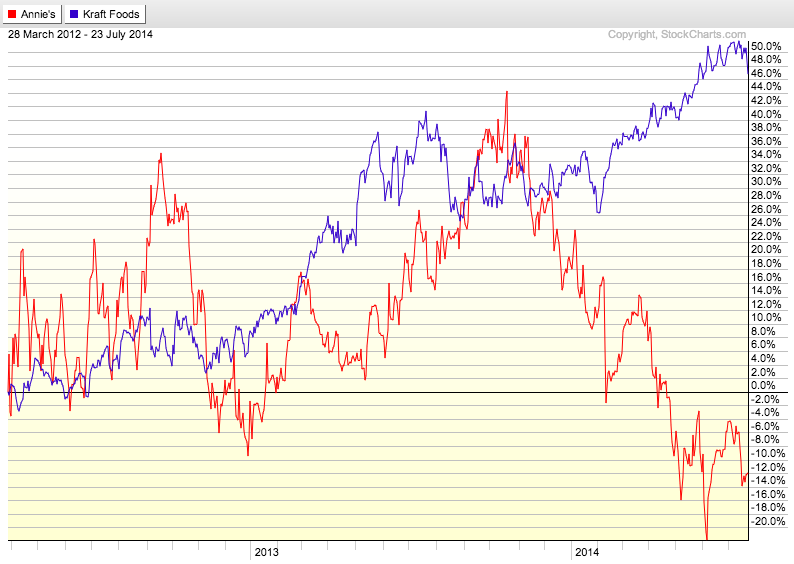 What this chart doesn’t tell you it that Kraft’s dividend payout is roughly double that of the S&P 500. It’s safe to say in the case of packaged foods that the health foods stock was crushed by Kraft while Kraft itself barely beat the market.

Another packaged health foods stock, WhiteWave Foods (Nasdaq: WWAV), has a much different story. The company’s late-2012 IPO was lackluster compared to that of Annie’s.

The stock actually fell 1.5% on its IPO date. But since then the company is up almost 85% while the S&P 500 has returned around 40%. In this case, yes, the natural foods stock beat the market.

United Natural Foods (Nasdaq: UNFI) is the major player in distribution of health foods. One of its competitors, Sysco (NYSE: SYY), is known for distributing more conventional foods as well as restaurant and foodservice supplies like gloves and spices.

Sysco has outperformed UNFI on a 1-year and 2-year basis. It’s only when you go back 3-years that you see UNFI outperforming Sysco. What’s more, UNFI pays no dividend while Sysco currently yields more than 3%. 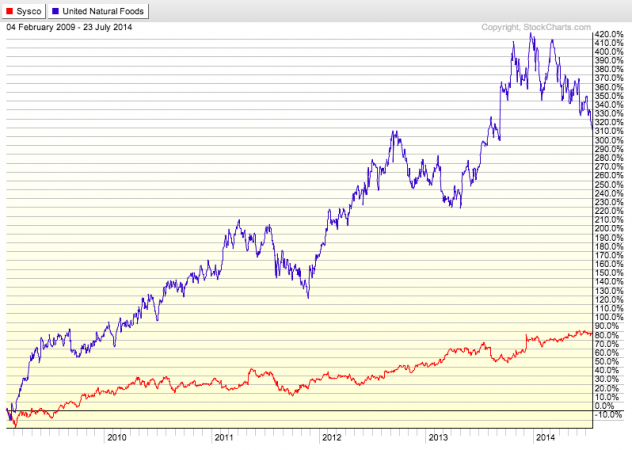 Had you bought both stocks at the depths of the financial crisis you would be up over 300% in your UNFI position and only 80% in your Sysco position. Meanwhile the S&P 500 is up over 150%. But the Sysco has beaten UNFI over the last two years and the market has outperformed both of them over the past four years.

Though the stock is down more than 35% in 2014, its performance over the past five years has been nothing short of impressive. Whole Foods is up 215% during that period while the S&P 500 is up 126% and grocery competitor Kroger (NYSE: KR) is up 136%.

But on a 1-year, 2-year, 3-year and even 4-year basis Whole Foods has failed to beat Kroger and hasn’t beaten the S&P 500 over the last three years. 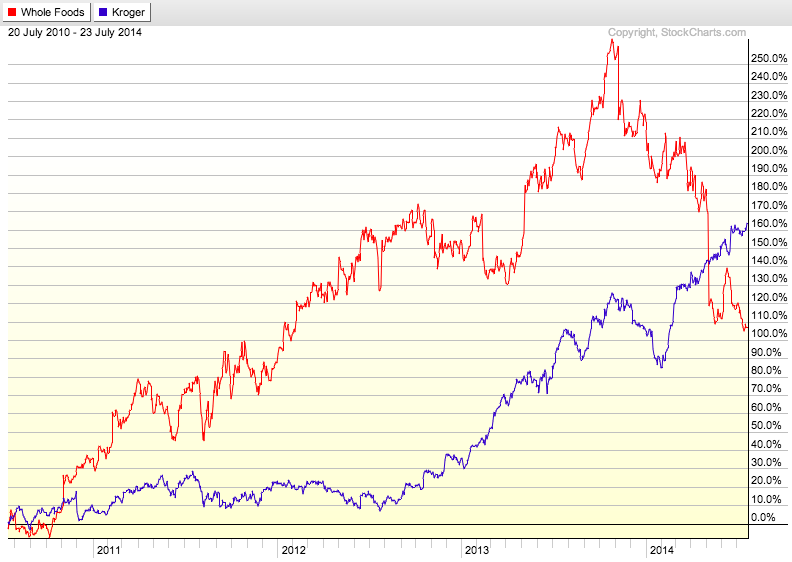 The bottom line is that investing in health foods is a bit of a mixed bag.

In the case of Chipotle and WhiteWave, the natural foods company has outperformed both the market and its conventional food competitors.

Whole Foods, UNFI and Panera have also done well, but you have to look back several years in order to see the companies outperforming either the market or their competitors.

Indeed there is no good answer to the question of whether health foods stocks beat the market. Like with all investing, timing and picking the right stock are essential.