I say that not to get a jump on Thanksgiving but to mark the end of a boundless election season – one that makes the baseball season seem fleeting in comparison.

I can't say I'm surprised by the election results. Last week, I wrote that speculators were foreseeing what today is now reality: Obama retains the White House for the next four years and the Republicans retain the House of Representatives for at least the next two years.

The Senate didn't quite adhere to the script. The split between the two parties was supposed to tighten, but Democrats were able to hold their 53–47 edge.

In short, we've got the same political distribution through 2014 that we've had over the past two years.

So what does that mean for the financial markets in general and to income investors in particular?

I think it means more of the same … and then some.

Stock-market participants were expecting a little less of the same, at least from the outset. They weren't particularly impressed with the election results, even though I'm sure many had already priced the results into the market.

But shouldn't gridlock be a good thing? It's only good when it alleviates uncertainty, not elevates it. The fiscal cliff remains a serious impediment to business planning – and thus economic growth – and likely will remain an impediment until the end of the year.

I'm concerned. If there is no resolution or compromise on the fiscal cliff, income investors will take a serious hit in 2013 due to the impending hike in dividend and income tax rates.

Income itself will remain a scarce resource. With Obama's re-election comes the likely continuation of Federal Reserve Chairman Ben Bernanke's easy money policies, which include holding interest rates at levels that fail to compensate for inflation, much less that provide a positive rate of return.

The income-investment market already resembles an evaporating pool on the Serengeti, with more investors piling into diminishing waters. Many investors, in my opinion, are swimming in dangerous waters.

The high-yield bond market is one pool I would avoid, because investors have pushed yields down and risk up on these securities.

The narrowing gap between high-yield corporate bonds and the 10-year U.S. Treasury note, apparent in the graph below, tells me more investors are desperately searching for yield, risk be damned.

There is certainly risk, whether investors want to acknowledge it or not. When interest rates rise (and they will) or should the economy weaken (a possibility), holders of these high-yield (colloquially known as “junk”) bonds will find themselves in a completely evaporated income pool.

A 450-basis point spread between high and low credits tells me too many investors are impervious to the risk. 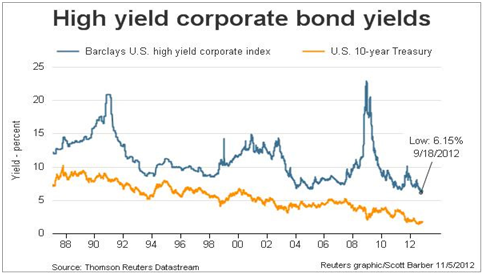 I see more risk in 2013. Investors piling into proven income investments will continue to push the prices of these securities up and their yield down. That means more risk.

Positioning an income portfolio to calibrate risk with reward will be challenging.

The good news is that the High Yield Wealth portfolio is meeting the challenge. Many of the investments continue to raise their annual payouts, while others offer a high-yield, tax-efficient distribution to counter the impending dividend tax rate increase.

Many issues have also posted 20%-plus price appreciation.

To be sure, finding quality high-yield investments that meet the High Yield Wealth standards will be difficult.

We are swimming in an evaporating pool of quality income investments, but there is still a pool. So long as that's the case, there will always be at least a few investments whose income streams compensate for the risk taken.