These are swinging times on Wall Street.

U.S. stocks are up 6% year-to-date, rising to new all-time highs last week. The Dow Jones Industrial Average just completed its longest winning streak in 17 years. Sequestration, the fiscal cliff, GDP declines – none of these supposedly apocalyptic events has been able to keep the markets down of late.

It’s easy to forget that we’re just 15 months removed from one of the most volatile trading years in recent memory.

2011 was a topsy-turvy year for stocks. Two-percent swings in the market were almost a daily occurrence. The S&P 500 finished the year flat, while the NASDAQ was down 1.8%. Uncertainty was a yearlong theme that didn’t relent essentially until the calendar flipped to 2012.

And Europe was the reason for all the uncertainty.

As the euro zone’s sovereign debt problems worsened, investor concern swelled. Wall Street hung on Europe’s every move. Or so it seemed.

The whole year was a rollercoaster, with U.S. investors riding the day-to-day ups and downs of what was happening across the pond. Eventually, many investors elected to sit on the sidelines, seeking safe haven from the volatility that plagued the markets.

That’s where gold came in.

Gold, of course, is the ultimate safe haven, unaffected by a collapsing currency such as the euro. So investors flocked to gold, prompting a 10% run-up in the yellow metal by year’s end. Gold reached as high as $1,888 an ounce in late August just as stocks were nearing their low point. 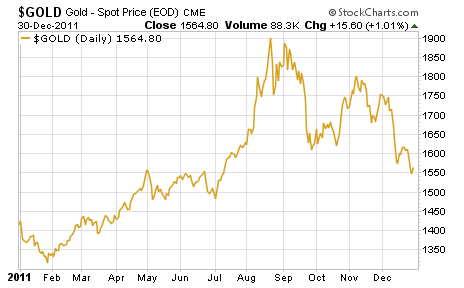 Since then, however, gold has been underwhelming.

The European debt crisis has been largely absent from the financial headlines in recent months. Or it’s at least been pushed to the back pages.

Domestic financial crises such as the fiscal cliff and sequestration have attracted the bulk of Wall Street’s attention of late. Prior to that, the presidential election was U.S. investors’ main focus. It’s as if people forgot about Europe for a year – which is perhaps why stocks have flourished and investors have felt less compelled to seek safety in gold.

Our European amnesia, however, seems to be at an end. Cyprus, one of the euro zone’s tiniest countries (population: 1.1 million), managed to remind us all just how screwed up the European debt situation remains with its bank tax fiasco.

Investors are taking their first peak behind the euro-zone curtain in months, and they clearly don’t like what they see. That’s why stocks pulled back on Monday and Tuesday – and why gold vaulted back above $1,600 an ounce for the first time in nearly a month.

The Cyprus mess dredged up some bad memories for investors, injecting some real fear into the market for the first time since the days before a fiscal cliff deal was reached. How much fear? The CBOE Volatility Index (VIX) – known as the “fear index” – shot up 35% in the first day and a half of trading after the Cyprus news came to light.

With all eyes back on Europe, uncertainty appears to have returned. It’s too early to tell exactly how Cyprus’ debt problems will affect the rest of the euro zone. At the very least, Cyprus’ woes have shined a spotlight back on other debt-ridden countries such as Italy and Spain, both of which may require further bailouts.

As European fears return, gold should prosper. The yellow metal is cheap right now, well below its 50-day and 200-day moving averages even after its recent mini-rally. With investors perhaps on the lookout for euro-zone safe havens again soon, gold’s rally has likely just begun.

You can thank Cyprus for that.