The average investor knows next to nothing about hyperinflation – but they should.

These events aren’t rare. They occur all the time, they happen to big countries and small, and they can completely blindside even “sophisticated” investors who aren’t prepared.

The Cato Institute, together with Johns Hopkins University, published a working paper on modern examples of hyperinflation this past April.

It’s a relatively short paper that seeks not to understand hyperinflations, or even to discuss why or how they happen. Rather, its purpose was simply to document exactly what happened in each event, how long it took and how much the currency devalued.

Surprisingly, and perhaps underscoring how uninformed most people are, no such paper had documented all 56 of the world’s modern hyperinflation events in this way.

It’s a significant enough type of event that you’d think there would be more information out there. But there’s not. That these researchers broke new ground on the facts behind some relatively old hyperinflation events tells us something.

Some of these events happened quite recently, as you can see from the abridged table I cut and paste from the paper. 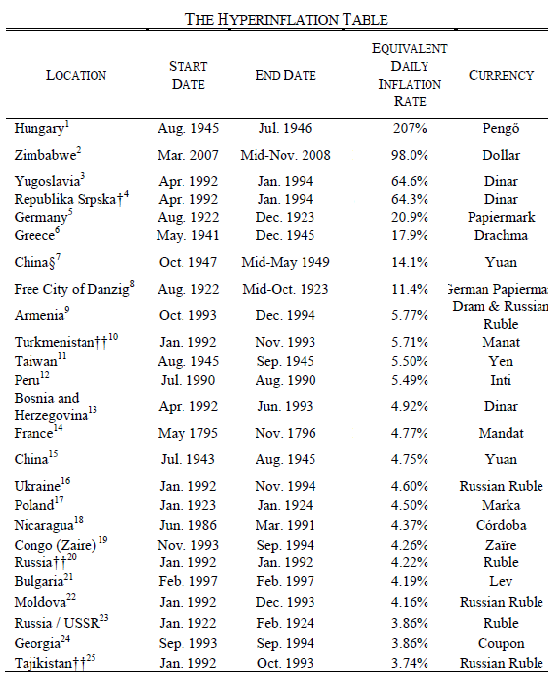 (You can see a full, unabridged version of this table for free, showing all 56 examples by clicking here now)

The fact that may jump out at you is how fast these events can occur – and how short of a timeframe they typically last.

The overwhelming majority of them last less than a year. They rarely last longer than two years. That’s in part due to the definition of hyperinflation, which the paper cites as any period of monthly inflation higher than 50%.

It’s also partly because the underlying currencies typically stop being used after that timeframe. People can’t afford to keep using a currency once it devalues several hundred percent. Even people “rich” with the devalued currency stop using it.

What do they use instead? Well, they typically revert to barter. Some smart people might have foreign currency reserves.

But the people who make out the best? Those folks who own a small amount of gold and silver. How much gold and silver would you need? Well, just look at how long the hyperinflations last.

At least six months – and up to two years worth of living expenses – would be my best estimate.

The question you have to ask yourself is: How much do you have now?