Investors are desperate for yield. Some are getting real desperate … and to that I'll add foolish.

I say this because the dearth of income and yield found in fixed-income markets has investors seeking income and yield in all the wrong places. Many investors have jettisoned the basic concept of risk commensurate with return in favor of return only.

Nowhere is this reckless behavior more apparent than in the junk-bond market.

Junk bond sales are on a tear, and guess who is leading investors down this road to perdition? Wall Street banks, which have been underwriting and selling junk bonds at a record pace.

Bloomberg reports Wall Street sold a record $433 billion in high-yield, low-quality bonds in 2012, collecting $6 billion in fees in the process.

That record will be eclipsed, and easily so. Bloomberg goes on to report our Wall Street friends have already underwritten $89.6 billion in junk bonds, a 36% increase over the same period in 2012.

Data compiled by Bank of America Merrill Lynch show demand for junk bonds has pushed prices up to record levels. In turn, yields have collapsed to 6.5% – the yield of a triple-A corporate a decade ago – from a peak of 22.7% in late 2008.

At the same time, investors are piling into student loans. Zerohedge.com reports that the trading firm SecondMarket Holdings has opened a new platform that allows lenders to issue securities backed by student loans.

Barry Silbert, SecondMarket founder and chief executive, says, "At the end of the day, investors are yield searching."

Indeed they are, and it's becoming more apparent investors are searching in all the wrong places. I mentioned in a post earlier this week that at the end of the fourth quarter 31% of student loans, both private and federal, were more than 90 days past due. That’s far worse than the 24% delinquency rate at the end of the 2008 fourth quarter when the country was mired in a recession.

I have all but given up looking for income and yield in U.S. fixed-income investments for the High Yield Wealth portfolio. The risk is simply too high for the return. The bubbles forming in the junk bond and student loan markets are consequences (unintended or otherwise) of the Federal Reserve's monstrous quest to monetize everything.

There is really only one market worth vetting for yield and income – the equity markets. And even that is becoming palpably more risky.

As risky as all markets are these days, the good news is that return can be found that is commensurate with risk. For investors with long-term horizons, the returns generated from dividends in particular still offer value.

Dividends have always been a rich vein of income and return. The table below reveals the importance of dividends in the grand scheme of total returns. Over the past 82 years, dividends have contributed nearly 42% to the total return of the S&P 500 (in the 1970s it was 71%). So far in the 2000s, dividends are the return. 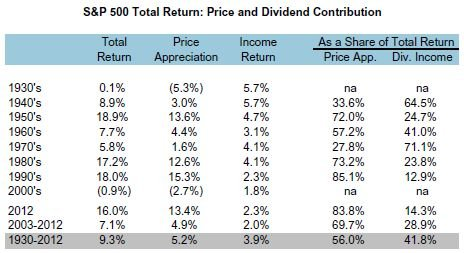 When risk rises, as it has today, I'm invariably asked, are you getting out?

I always answer ”no” because I have to participate in the market to be a successful dividend investor. Cash doesn't generate a return; income-generating investments – the kind that comprise the High Yield Wealth portfolio – do.

The problem is, I don't know when investment return will materialize. What's more, I only need to miss a few strong-advance days before my long-term returns suffer. The chart below reveals just how import being invested is and how returns are diminished when investors are sidelined during market rallies. 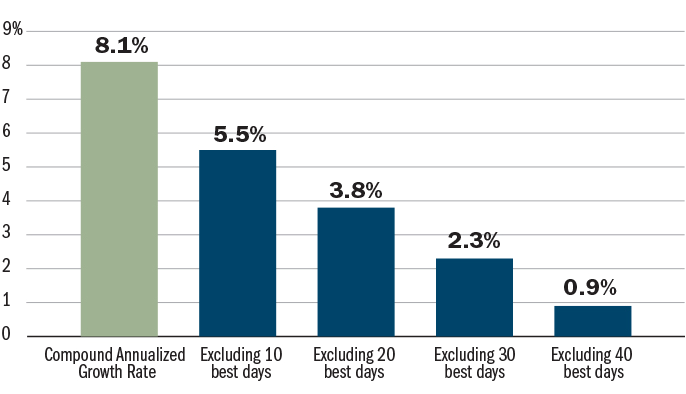 The point is that if I'm invested through thick and thin, I'll do better than if I'm out when the market rallies. Of course, this begs the response: just get in before the market rallies. Unfortunately, I don't have such a clairvoyant crystal ball (and neither does anyone else).