Whenever I hear a pundit gush over a particular country’s impressive economic growth, I’m invariably reminded of a useful Adam Smith quote that tamps down any budding enthusiasm on my part:

"[T]he rate of profit does not … rise with the prosperity . of a society. On the contrary, it is naturally low in rich, and high in poor countries, and it is always highest in the countries which are going fastest to ruin."

That quote has helped inure me from the China bug, even though its official annual GDP growth rate is always three, four, or even five times that of U.S. GDP growth.  China is being steered by bureaucratic philosopher kings who favor massive projects – real estate, infrastructure, mineral mining, and energy production – whose numbers are easy to aggregate and average to produce impressive GDP growth.

I view high-growth companies just as suspiciously.  It’s not that I think the numbers are fraudulent; it’s that I know the exceptional growth rates are unsustainable.  Back in the late 1990s, investors were quibbling when Cisco Systems (NASDAQ: CSCO) would become the first trillion-dollar market-cap company.  Cisco never hit that milestone.  Today we hear similar banter on Apple (NASDAQ: AAPL).

When investors think of growth, they think of high revenue and earnings growth, and maybe expanding operating and net income margins.  They are looking in the wrong place; they should be looking at dividend growth instead.

Arnott’s and Asness’ research shows that expected future earnings growth over time is fastest when current payout ratios are high and slowest when payout ratios are low or nonexistent. Their evidence contradicts the conventional view that substantial reinvestment of retained earnings will fuel faster future growth.

The fact is a big cash horde can lead to investments that destroy wealth. Microsoft (NASDAQ: MSFT) sits on a massive cash pile, which it almost squandered by grossly overpaying for Yahoo! (NASDAQ: YHOO) a few years ago.  Fortunately for investors, Microsoft let Yahoo! go and turned more of that cash to dividends rather than to large, and possibly, wealth-destroying acquisitions.

Dividends, according to Arnott and Asness, instill discipline and dissuade empire building – the higher the payout ratio, the more the discipline.  Inefficient empire building lays the foundation for poor earnings growth in the future.

Higher payout ratios, on the other hand, lead to more carefully chosen projects, because capital simply isn’t available to throw at any project that comes down the pike.

No stock backs Arnott’s and Asness’ theory more than High Yield Wealth stock and Marlboro cigarette manufacturer Altria (NYSE: MO), which was added to the portfolio in September and has rewarded us with a 14% return since.

In 2005, Wharton School finance professor Jeremy Siegel wrote an insightful essay titled "Ben Bernanke’s Favorite Stock." That stock was Altria.  Siegel wrote that from 1957 (when the S&P 500 Index was founded) to 2005, Altria produced an average return of 20% annually, handily beating the other 499 members of the index.

Six years later, little has changed, and Altria’s high-return trend continues unabated.  In fact, from 2001 to the present, Altria’s stock appreciation alone translates into a 15.1% compounded average annual growth rate. Tack on an average dividend yield of around 5%, and you get that vaunted 20% average annual return.

Though Altria isn’t a conventional growth stock, I was interested to see how it compared to such stocks. I compared Altria’s stock performance to the hottest of the hot technology stocks of the late 1990s: Dell (NASDAQ:DELL), Microsoft, and Cisco Systems. The chart below speaks for itself. 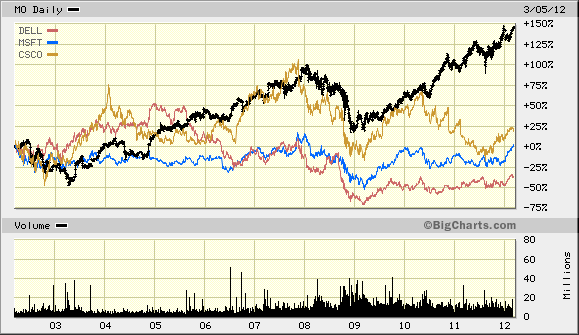 Altria continues to churn out profits and pay investors most of its earnings – 80% to 90% annually – in dividends.  Altria’s high payout means its dividend yield has remained consistently high. Since 1992, the average dividend yield of Altria has been around 5.3% versus roughly 2% for the S&P 500 Index.

Altria has never lowered its dividend, and has raised its dividend every year for the past 44 years.  The latest increase (an 8% bump) occurred this past September.

What Altria demonstrates (and Asness and Arnott don’t directly address this) is that your growth – the growth of your wealth – matters most, not the growth of the company.  Altria has demonstrated that no company is able to match it in growing investor wealth over time.

Ten years from now I’ll overlay Altria with Google (NASDAQ: GOOG) and Apple. All I can say is that I wouldn’t bet against Altria.