In early February, stocks looked as though they were breaking down. We had just gotten through the Dubai debt problem. China was raising reserve requirements for banks to slow the rate of lending. And then the news about Greece’s debt problems broke.  The S&P 500 had dropped from January highs at 1,150 to as low as 1,044. That’s a 9% move, and if you recall it was enough to get investors a little nervous. In fact, some were even saying that the global economic rebound was done before it was even a year old.

It was about that time that I started including TradeMaster Daily Stock Alerts’ Jason Cimpl in our daily conversation here at Daily Profit. Jason is the technical analyst and trading strategist for TradeMaster Daily Stock Alerts. In other words, he studies buying and selling activity in the financial markets in order to gain an early read on the market’s next move. He’s good at it, and his skill has earned him a few hundred loyal members to his trading service.

You may recall, Jason was bullish in early February. He told us he expected the S&P 500 to move back to 1,085 and eventually move as high as 1,120, where it is today. And of course, he made plenty of upside recommendations to his loyal readers. In fact, out of 13 trades initiated in February, TradeMaster Daily Stock Alerts readers made money on 9 of them. That’s a 70% win rate. Total gains were 47%.

I will include commentary from Jason on a regular basis here in Daily Profit. And so you know, he’s expecting more upside. In his own words:

We are still trading with a bullish bias and we will get very bullish on a break beyond 1132.

In addition to the recent strength in the small caps, we have seen strong performance in the Transportation Index which has moved sharply higher from its February lows. Curiously, the Industrial Index is dramatically underperforming most other industry groups. Often the Transports and Industrials move together, but last month the Industrials clearly lagged behind. That index needs to catch up this week.

I’m very curious to see what happens when the dollar starts moving lower. Australia raised interest rates again last night. Greece is on the verge of getting its bailout. And the U.S. is already prepping investors for a very bad employment report this Friday (it was the snow).

Each of these items is bearish for the dollar. We’ve looked at the U.S. Dollar Index chart already this week, but it’s worth a review… 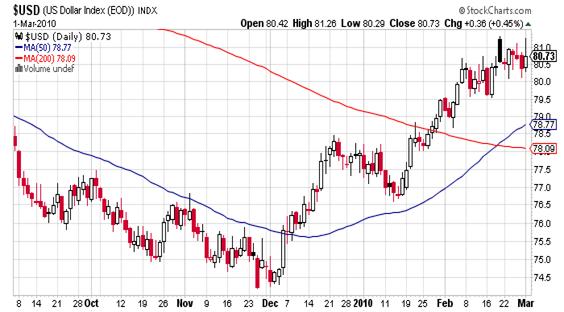 The dollar has been trading between 80 and 81 for nearly two weeks. Some kind of move is likely soon.

We’ve seen the traditional inverse relationship between stock and commodity prices weaken over the past couple of months. Gold, oil and stocks have rallied alongside the U.S. dollar. But I suspect that a weaker dollar will send each of these assets even higher.