"NEW YORK (AP) – Stocks had their worst day of the year Friday after Greece hit a roadblock on its way to a critical bailout."

The worst day over the past 2 1/2 months has been a dip of -0.73%. Okay, so with that being said, in which direction do you suppose the market will move over the short to intermediate-term? Would you say the risk is now to the upside? Do you think probability lies with the bulls or bears after an average year's worth of market gains in just 28 trading days?

As most of you already know, almost every indicator I follow, both technical and sentiment, is bearish.

But, something Friday made me particularly happy. 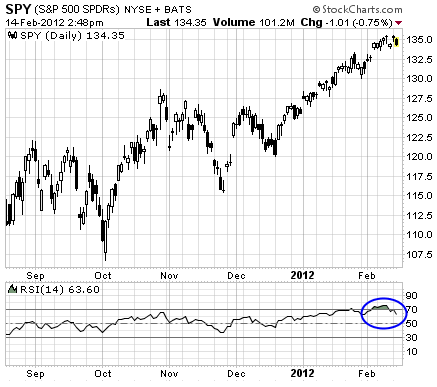 Yes, the RSI (14) dipped back into a neutral state. Historically, when we see a move from overbought back into neutral in the RSI (14) the move continues for at least a few more trading sessions, if not a few weeks.

I would argue due to overwhelming bearish technical and sentiment measures coupled with the chart above that a close of the February 3rd gap (as seen in the chart above) will close this week.

We have all seen this song and dance before, the market grinds higher and crashes lower. It's like stacking pennies and now the stack is teetering. Before you know it SPY is back at $127.50.

I am not calling for a crash. But let's be real. The market can't sustain this push. Of course, this rally could be an anomaly and the market may push even higher over the next few months, but I try and stick to the probability of a move and it certainly is not for further upside, at least over the short to intermediate-term. And remember, successful options trading is all about probabilities.

Interestingly enough the move brings back a Wall Street adage that has stuck with me since the beginning of my trading career.

"If a stock makes a large move (over 10%) in a single month period, the odds are greater than 2 to 1 that it will move in the opposite direction in the next monthly period."

I suspect that once again the adage will come to fruition and we should see at least a 3%-8% pullback over the coming weeks.

Implied volatility, as seen by the VIX pushed higher towards the latter part of the week, so fear is moving back into the market. The question is, will it continue?

If the VIX can push back into the 30s, I would expect to see a move back to the high 120s in SPY and potentially a close of the January 3rd gap.

However, if this is indeed a move well on the fringes of the bell curve, $140 has to be on the radar.