QUALCOMM (NASDAQ: QCOM) is on the verge of a massive move.

The shares of this telecomm/semiconductor giant trade in a perfect wedge formation. A wedge (blue lines) is a consolidation pattern that occurs when a stock makes a series of lower highs and higher lows. Since it’s a consolidation formation, the breakout from the wedge often favors the direction of the former trend. However, the bias is minute.

QCOM had been in a positive trend prior to forming the wedge. So investors should mildly expect the stock to break through overhead resistance near $66 and begin another leg higher. 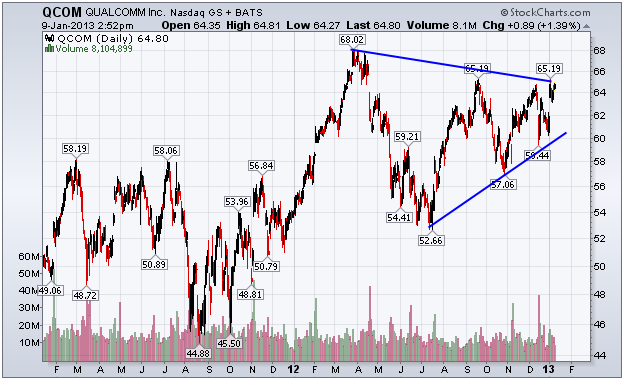 This chart shows the price of QCOM shares along with an important wedge pattern to monitor.

Though the semiconductor industry is highly competitive, QCOM continues to win big contracts. More importantly, its gross margin has stayed above 62% during the past five years. This suggests there is a healthy demand for QCOM products because customers have been reluctant to bargain for lower prices.

The average P/E ratio for the communication equipment industry is 14.8, suggesting that QCOM is correctly valued. However, that comparison is slightly misleading.

QCOM has a gross margin of 63% and an operating margin of 30%, while the industry average is 35% and 1%, respectively. Given QCOM’s margin supremacy, the shares deserve to carry a higher P/E ratio than the industry.

In addition to the bullish technicals and favorable fundamentals, QCOM yields 1.6%. Moreover, it has zero debt.