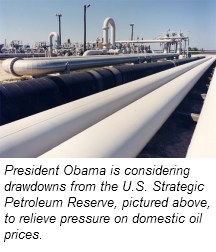 The U.S. Strategic
Petroleum Reserve is an estimated 727 million barrels of oil sits in salt
caves along the coast of Louisiana and Texas. And now that unrest in the
Middle East has spiked oil prices close to $107 a barrel, President Obama
is reportedly considering releasing some of that oil into the market to
help control rising oil and gasoline prices.

Of course, no one is certain that more oil supply will help reverse
prices. Saudi Arabia has already increased production, and oil prices are
still rising.

Oil prices continue to rise because investors are becoming increasingly
worried that unrest is spreading to major oil producers like Iran and
Saudi Arabia, which so far had been relatively immune to turmoil in
northern Africa and around the Arabian peninsula. Clearly, any supply
disruptions in Saudi Arabia and oil prices will go sky high.

Investors are advised to have oil exposure only in politically stable
countries, like the United States and Canada.

The United States is home to one of the most important and based oil
discoveries in the last 25 years. To learn more about this 5 billion
barrel oil discovery,
click HERE.