The U.S. housing recovery has received a lot of attention lately. But housing is just one piece of the puzzle in a much larger construction revolution.
Less than five years removed from the worst recession since the Great Depression, U.S. construction spending is back on the rise. In July, construction spending topped $900 billion, up 5.3% from a year ago. The biggest increase came in the commercial sector.
The phrase “housing recovery” garners plenty of financial headlines these days. And with good reason. Housing starts have nearly doubled since May 2009. The encouraging housing numbers have prompted many investors to load up on housing stocks.
But the words “housing recovery” only tell part of the story. Really, America is in the midst of a “construction recovery.” Housing is a large part of that recovery. But as the most recent construction numbers revealed, so are office complexes, commercial buildings and factories.
Despite the recent run-up, however, construction spending is still well below its 2006 peak: 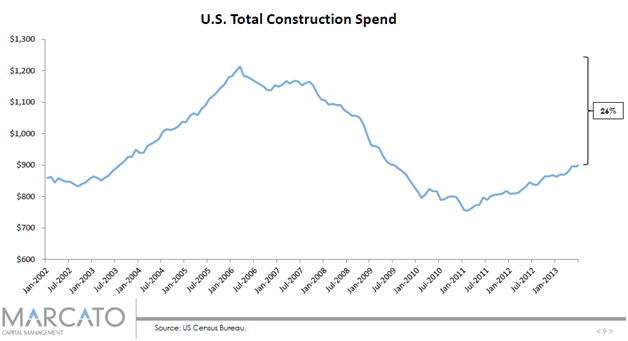 Construction spending today is at the same level it was back in 2003. In order to get back to peak levels of 2006, construction would need to jump 26%. Housing starts are even further below peak. The 891,000 homes built in August was nearly double the amount from April 2009, but still well below the 2.1 million homes that were built in February 2006.
Meanwhile, America’s post-recession wounds continue to heal. Unemployment has dipped to its lowest level since 2008. Gross domestic product (GDP) has grown for nine straight quarters – the longest streak since before the recession.
As those trends continue, more commercial properties will be built, renovated, or expanded. And construction spending will continue to rise.
Building construction is expected to increase 5% this year, and 7.2% in 2014. Commercial buildings are expected to lead the charge, with spending gains of 9% this year and 11% next year.
Housing stocks are the most obvious ways to play the construction recovery. But those only cover the residential portion of the recovery. In this month’s issue of the $100k Portfolio, we will introduce you to one such non-residential investment opportunity.
It’s a stock that is benefitting greatly from the U.S. construction recovery. And 96% of the company’s revenues are generated from the commercial construction market.
The company has operations in 99 of the 100 largest metropolitan areas, 49 of the 50 states and every Canadian province.
The company is already the dominant player in its industry, with three times the market share of any other competitor. Despite its considerable size, the company is in the midst of its greatest growth period, with revenues nearly doubling in the last two years. And at less than 10 times forward earnings and only four times estimated 2015 earnings, the stock is a bargain.
To subscribe to the $100k Portfolio, click here.
In the meantime, don’t be afraid to think outside the housing box when looking for other ways to play this recovery. America’s post-recession renaissance goes well beyond the housing market. If you’re an investor, the commercial recovery is equally compelling.