While it's nice to think about how well the market did in the first quarter, it's all in the rearview mirror now. The more important thing to focus on is what is going to happen in the future. And from my recent articles, you might have gathered that I am somewhat bearish.

The reasons behind my bearish stance are documented: downtrend in volume snapped and low CBOE Volatility Index (VIX) readings that suggest investor complacency. While I don't foresee a new long-term bear market, I do see the S&P pulling back to the trendline that connects the 2009 low with the lows from last fall. 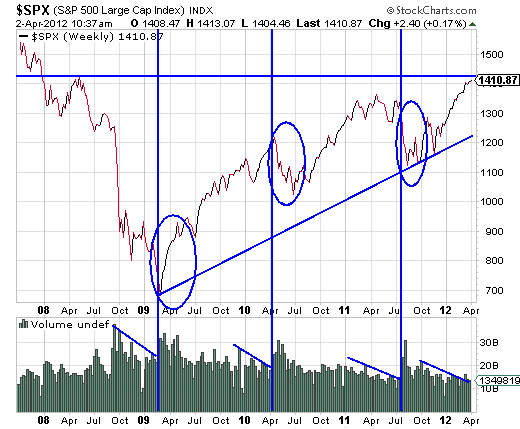 The rising trendline is currently sitting near the 1,230 mark, but is rising a little each week. If the market does start pulling back, the trendline could be up near the 1,250 mark by the time the S&P gets down to it. From the current level of 1,400, that would represent a decline of 11%. Such a drop would be right in line with the decline we saw in the spring of 2010. That decline also came after a downtrend in volume was snapped and it came when the VIX was flirting with the 15 level.

I'm not suggesting that you should rush out and sell all your stock holdings. Instead, I  recommend that you evaluate your holdings and take some gains or at the very least take steps to protect those gains, such as long-term puts on the overall market or an inverse ETF on the S&P 500.

Another consideration is a leveraged inverse ETF, which are designed to gain two to three times as much as the market declines.  A couple of leveraged inverse ETFs to consider are the ProShares UltraShort S&P 500 (SDS) and the Direxion Daily SmallCap Bear 3x Shares ETF (TZA).  One thing to remember, though, is that the leverage works both ways.