The rising deficit and raging debate over fiscal budget issues have been noticeable dark spots of the Obama presidency. But Obama has another, less talked about, blemish. In fact, it could turn out to be his biggest blunder.
Though the deficit and budget are larger (in terms of cost), this mishap by Obama costs you money every day. And it’s not in any way related to healthcare.
There is plenty of blame to share for the deficit. We’re reeling from overspending in two wars and ineffective government programs from the past.
So I’ll leave the president off the hook for some of it. Moreover, budget issues have been largely out of his control too, due to an unproductive Congress. In fact, with a 2% conversion from bill to law this is the most unproductive Congress in our lifetimes.
Obama can escape blame to a degree for the deficit and budget issues. However, as for high gas prices, the president played a large role … much larger than he’s credited for, too. More importantly, he may be the reason Americans could be fighting higher prices at the pump for decades.
The average price for a gallon of gasoline in the U.S. recently moved above $3.75. Moreover, the U.S. Energy Department said it expects gasoline prices for 2013 to average $3.55 per gallon. So any reprieve in prices may be minimal.
Gasoline is a cost we incur nearly every day. Sometimes it’s direct, like when you’re at the filling station. Other times it’s indirect. For example, businesses may increase the price for products (groceries, apparel, etc.) to offset higher shipping costs. Either way, higher fuel prices put a dent in your wallet.
Unfortunately, higher gas prices may be the norm, not the exception, in the years ahead.
This conclusion runs counterintuitive to Obama’s energy strategy, which has been to drill for more oil. Democrats are typically not kind to the domestic oil industry. However, Obama has been an exception. In fact, he’s been incredibly friendly to domestic oil drillers, especially considering the havoc caused by the BP disaster in 2010. 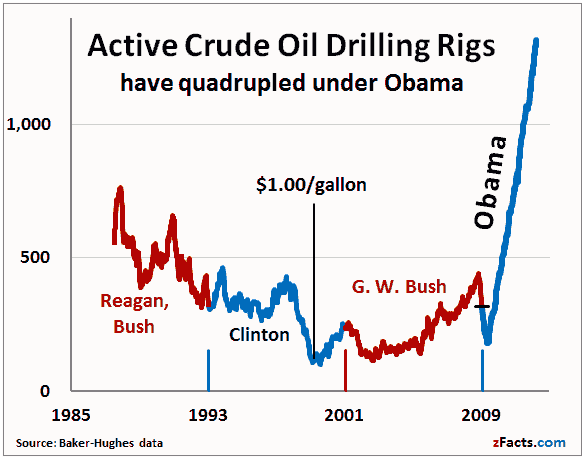 So higher gas prices haven’t come for lack of drilling. The Obama administration has added more rigs online in one term than a few of his recent predecessors put together.
Obama put more rigs online to lower gas prices and increase employment. Though more jobs have been created, especially in the Bakken region and Texas, gas prices have not decreased.
The additional supply from adding all those rigs should have sent oil prices tumbling lower. All else equal, a rise in supply with no change in demand will result in lower prices. And the U.S. demand certainly hasn’t increased. In fact, demand for oil has repeatedly tested or exceeded 4-year lows since last July.
So why has additional supply actually resulted in higher prices?
Though Obama has correctly tried to stem gas prices by drilling for more oil, he did nothing to control that supply. Businesses, being the profit-seekers they are, are selling our oil on the international market because U.S. demand slowed. So the biggest beneficiaries of higher U.S. drilling rates aren’t U.S. citizens – who have to put up with the noise and pollution from the equipment – it’s China and India.
Despite heavy restrictions against exporting crude oil, the Energy Information Administration reported that petroleum products have been leaving the U.S. in mass. In fact, the U.S. exported 3,331,000 barrels of petroleum per day in November. That’s roughly twice as much per day from when Obama first took office in 2009, and equals an additional 506,000,000 barrels annually.

Americans have had to pay higher gas prices as U.S. oil feeds the energy hunger of the Far East. Not only are higher fuel costs a huge burden for consumers to handle, we’re shipping away valuable resources and hardly receiving any benefit for our society in return. Moreover, this trend is getting worse. Next week I’ll continue with this topic and reveal another way you’re being screwed over by the government.
Editor’s note: If you would like to learn how you can bank steady gains with well-timed investments in stocks that are ready to run… then consider taking a free, 30-day trial to our growth stock service, Top Stock Insights. You’ll discover exactly how we’re earning exceptional returns and get instant access to every special report and investment recommendation. Click here to try Top Stock Insights, free.