It’s easy to get excited about the U.S. oil and gas boom
Every day, proven reserves in the ground are going up. This is a complete trend reversal from what most of us have experienced throughout our lifetimes. Both oil and gas reserves were in steady decline since the 1970’s. But that’s changing in a big way.
For natural gas, the turning point was around 1999. Since then, proven reserves are up a whopping 100%.
Crude oil maintained its declining profile until around 2008. But in just 4 years, crude reserves have climbed by 50%. These are massive increases in very short periods of time. 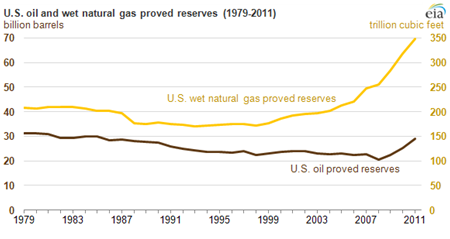 These numbers are all based on U.S. Energy Information Association (EIA) data. Funny thing is, due to EIA budget cuts the organization isn’t tracking numbers quite as carefully as it used to. The latest data is from 2011.
If it was updated as of right now, reserves would have increased even more. But of course, there aren’t a lot of people reporting to EIA headquarters today. But that’s a different story…
And even if there was no government shutdown, the EIA’s figures are known to be conservative. Technology and recovery methods are always improving. So much so that we’re likely sitting on enough natural gas to serve our needs for more than 100 years, and enough crude to fulfill 35 years of domestic demand.
But if I was a betting man, I’d wager that we’ll still have plenty of oil in 35 years. If previous estimates were accurate, we would have run out of oil and natural gas long ago.
The bottom line is this: the U.S. has enough oil and natural gas to free the country from dependence on foreign oil. One example is particularly interesting. This chart compares total daily oil production in the U.S. and Saudi Arabia from 1999 to the present.

Notice how 2002 was the last time we produced more oil than Saudi Arabia. This is why we’ve been importing more than 40% of our oil lately.
The U.S. was really getting crushed in the 2004 through 2008 period. But then things began to change as horizontal drilling technology permitted access to the vast reserves of oil on U.S. soil.
Now, U.S. imports of crude oil are dropping and domestic production is booming. And in the near future, we’re likely to overtake Saudi Arabia in oil production once again, decreasing our foreign oil dependence even more.
The same result is true for natural gas. Horizontal drilling in areas like the Marcellus shale of Ohio has made natural gas so abundant that some pipeline operators are overloaded.
The abundance of natural gas makes it far more economical than crude oil in many industries. The following chart shows the price of the respective energy sources per MMBTU, or unit of energy output.
Note that natural gas (red line) is less than 1/3 the cost of oil (blue line) for the same energy output. That’s a compelling proposition for any industry that can make the switch.

The transportation industry is already switching over. Given that fuel is around 20% of its overall cost, the industry has a lot to gain by switching to natural gas-powered vehicles.
With natural gas so cheap, both consumers and businesses are getting wise to the potential savings. Trains, refuse trucks, mining trucks, long-haul trucks and even lighter vehicles like Volvo wagons and Ford F150-s are now available with natural gas engines.
These three charts paint the picture of a dramatically changing energy landscape here in the U.S. Don’t ignore it. It’s going to be here for a while and the benefits – and yes, some drawbacks – will be felt across the country.
Today at 2:00 pm eastern time I’ll be joining Ian Wyatt to discuss the rapidly changing energy landscape in our free investing seminar.
This special event is called U.S. Energy Alert: 3 Profit Plays for 2014 and Beyond. During the event we’ll be discussing three massive investment trends for capital gains and steady income; explorers & producers, pipeline operators (MLPs) and natural gas engine technology. Plus, we’ll share all the details on our top investment ideas for capital gains and steady income.
If you’re interested in learning the best plays please sign up today. It starts in just a few hours, so RSVP for this free LIVE teleconference right now to reserve your seat.