We need to remember that back in late 2008, U.S. energy production was near a historical low. But through several innovative technological advancements, the U.S. has tapped previously undiscoverable oil. The result, well you can see for yourself in the chart below. 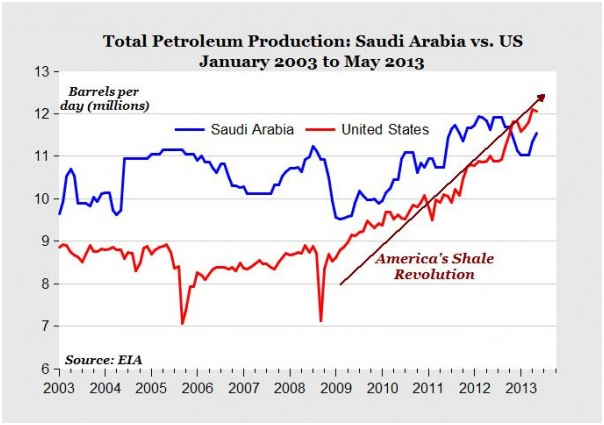 Out go the Saudis and Russians, in come the United States.

And almost nothing else in the news cycle has as much of an impact on our daily lives and fortunes as the energy market.

As Americans we consume vast amounts of energy every day – more than any other people in the history of the world. So energy news has a big impact on everything we do. From the kind of cars we drive, to the type of fruit we eat, and how much we pay to heat our homes.

Businesses and entrepreneurs looking to profit from rising energy prices pumped billions of dollars into the energy sector. And the result was nothing short of astounding. As Adam Sieminski of the U.S. Energy Information Administration says in today’s Journal article:

"This is a remarkable turn of events. This is a new era of thinking about market conditions, and opportunities created by these conditions, that you wouldn't in a million years have dreamed about."

Guess what Mr. Sieminski? You’re wrong. Americans dreamed about these opportunities – that’s why they exist today. And that’s why they’re getting better every day.

Starting in around 2009, revolutionary drilling technologies started accessing massive amounts of shale resources in America. This in turn helped launch the U.S. to become the world’s No. 1 petroleum producer by the end of 2012. The U.S. hasn’t looked back since.

But without the huge amount of capital investment in energy projects during 2007-2008, we wouldn’t have seen the amount of drilling in 2009. Or maybe even 2010. Or maybe ever.

The most exciting part of this story is that we’re still in the early innings of a growth phase that is expected to bring in hundreds of billions of dollars from exports and more importantly, create energy independence for the United States.

If you're interested in learning more, click here to read all our team's research on this incredible opportunity Ian Wyatt calls, "the greatest wealth creation event in a decade."

You'll find out about 7 energy companies reaping massive profits from surging U.S. oil and gas production we're recommending right now. Including the details on how you can grab a just-published report three detailed special reports about this unique profit opportunity.

Click here for all the details before this research is taken down on Monday, October 7th.