You might expect big oil companies like Exxon Mobil (NYSE:XOM) and Chevron (NYSE:CVX) to profit from the oil and gas discoveries in the U.S.
But the fact is, these energy giants are missing out. Last year, Exxon’s production fell by 6% and Chevron’s cost to produce oil and gas has surged 41%. That combination of shrinking production and higher costs isn’t a recipe for success.
But there is one overlooked industry that stands to benefit considerably from the changing energy landscape in the U.S.
That big winner is the transportation industry. That’s because it spends nearly 20% of its gross output just on energy and cheaper energy has a huge impact on the bottom line.
Even the energy intensive agriculture industry only spends 9% of its output on energy. Construction, mining and manufacturing spend far less than transportation too.

Energy Cost As A Percent of Industry GDP
Source: Bureau of Economic Analysis 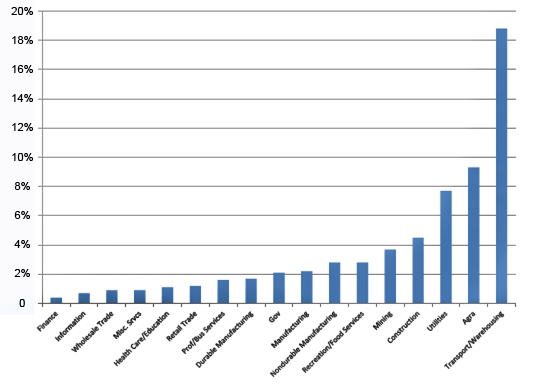 You likely haven’t heard much about this because many transportation companies haven’t been able to jump on the opportunity – at least not yet. I view this as an opportunity, since the trend is just beginning.
Our nation’s energy infrastructure needs to catch up with the massive supply of natural gas in the ground.
Today only 1,000 of the country’s gas stations currently sell natural gas – that’s less than 1%. This is beginning to change as politicians increasingly support bills favoring this clean burning and abundant fuel.
Even with limited infrastructure, natural gas powered vehicles are increasingly showing up on U.S. highways. This is especially true in fleet cars, buses and long-haul trucks where the cost savings over gasoline and diesel are especially high.
Companies such as FedEx (NYSE:FDX) are ramping up pilot programs to capitalize on the abundance of cheap natural gas. In a few more years, they’ll be able to outfit their fleet of delivery vehicles with natural gas engines.
The engine technology has been around for a decade, even though there are only around 120,000 natural gas vehicles on U.S. roads. Other countries like Pakistan, Argentina and Iran were early to jump on board, and have many more.
In Pakistan for instance, 2.9 million vehicles (64% of the fleet) currently run on natural gas. And worldwide there are over 15 million natural gas vehicles on the road, according to the Natural Gas Vehicle Association (NGVA).
I’m not expecting businesses to switch to nat-gas vehicles overnight. But for new cars and trucks, it’s often a no-brainer. Especially for trucks with very set routes and very heavy loads. Garbage trucks are the perfect candidates, and more than 40% of new garbage trucks now sport natural gas engines.
With natural gas prices so low, the economics even make sense for heavy duty pickup trucks like the Ram 2500 and Ford F250. Both are currently available with natural gas engines.
The path to lower energy costs in the U.S. isn’t lit with oil – it’s lit with natural gas. It’s the cheapest energy source by far, and rapidly rising natural gas reserves are only going to keep the cost of the commodity down.
We’re just now seeing the start of a massive shift in the transportation industry. Not only for technology companies that make these engines, but also for the thousands of companies that can attain higher profit margins by making the switch from gasoline and diesel.
We’re on the verge of a tipping point, and soon the transportation industry is going to jump on the natural gas bandwagon.  It just has far too much to gain to ignore the trend. Early investors stand to make handsome profits jumping on board as well.