Hubris or folly?  I’m unsure which word to apply, because both are so often and so equally appropriate when government intervenes in the market.
The latest attempt to square the circle occurred when the United States and the European Union set sanctions on Iran’s crude exports and its central bank.  These sanctions, authorized in the National Defense Authorization Act for Fiscal Year 2012, were sold on a putatively and carefully written plan that included plenty of flexibility to ensure prices at the consumer end would remain unaffected.
The chart below tells a different story. 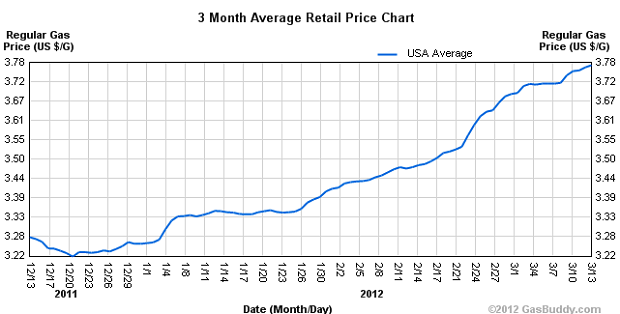 In short, the planners got it wrong.  The key was for everyone to react “rationally,” and by rationally I mean react to the planners’ expectations on the very limited information they had.
Of course, markets didn’t react to the planners expectations, because markets don’t react.  Markets are only an aggregation of individual actions – all uniquely inspired and motivated.
The frustrated experts think differently.  Many of them point an accusatory finger (wrongly) at a small cadre of market manipulators: namely futures traders, hedge fund managers and speculators.
Bottom line – oil prices are high and, due to unanticipated (by government) and unintended consequences, are higher than they should be.  Moreover, prices are likely to remain at today’s elevated level.
The U.S. Energy Information Administration (EIA) initially forecast oil at $101/barrel for 2012. That forecast was upped this month to $106/barrel, yet the forecast still fails to factor in the effects that the sanctions have had on Iran’s crude oil production.

The private sector is factoring in the sanctions.  Reuters reports that hedge funds and other money managers have boosted long exposure to crude futures and options by more than 65 million barrels since the beginning of the year after upping that exposure by 80 million barrels in November.
Higher oil prices point to higher earnings and higher dividend payouts from firms that bring supply to market.  Large exploration companies, such as High Yield Wealth stock Diamond Offshore Drilling (NYSE: DO), are particularly intriguing from a dividend-investor’s perspective.
Diamond commands a fleet of 46 offshore deepwater drilling rigs, which it leases to the major integrated oil companies.  What happens in the Middle East isn’t a concern for Diamond, because 63% of its revenue is generated from offshore oil drilling in the Western Hemisphere. Brazil accounts for the majority of that percentage – 49% in 2011.
The good news is that deepwater day rates are on the rise, driven by strong demand off Brazil’s coast and increased drilling activity in the Gulf of Mexico.
Diamond is the most prolific dividend payer among offshore drillers, though you might think otherwise.  A typical screen shows that Diamond produces a paltry 0.7% annual yield based on its $0.125 regular quarterly dividend payment, yet the “real yield” far exceeds 0.7%.
The vast majority of Diamond’s dividends are special dividends, which are paid in addition to the stated dividend.  With each stated quarterly dividend of $0.125, Diamond also pays a special $0.75 dividend.  Thus, the annual distribution is $3.50 a share, not the stated $0.50.
Diamond’s shares are up 11% for 2012, yet it still produces a market-beating yield that is the highest among offshore drillers.  What’s more, Diamond remains a good value – trading at a nine P/E multiple.  Few large oil firms trade at a nine P/E multiple while simultaneously yielding over 5%.
Dividend investors should also look at Total Petroleum (NYSE: TOT), a large integrated oil firm that actually yields more than Diamond Offshore.
Total is basically France’s version of ExxonMobil (NYSE: XOM).  The company has a $123-billion market cap and generated $232 billion in revenue in 2011. Like ExxonMobil, Total is everywhere and in everything carbon-energy related. Its operations spread over 130 countries.
Total is unlike ExxonMobil in that it is one of the few large integrated oil companies that has not moved strongly to the upside.  Much of Europe has been marked with a Scarlet X because of Greek debt and euro concerns, and that includes Total.
Ostracism creates opportunity, though.  Total is very profitable. It’s expected to earn $7.08 this year, which means it’s trading at only 7.7 times 2012 EPS.  In comparison, ExxonMobil trades at 10 times its 2012 EPS estimate of $8.30, while Chevron (NYSE: CVX) trades at 8.6 times its 2012 EPS estimate of $12.79.
But Total yields around 6%; both ExxonMobil and Chevron yield less than 3%.
None of us are happy to pay more at the pump, and for that we can point to government policy (whether that policy is right or wrong is a moral consideration). At least we can offset the higher cash outlay at the pump with additional dividend inlay from two high-yield energy companies such as Diamond Offshore Petroleum and Total Petroleum.
Good Investing,
Steve Mauzy
Research Analyst
High Yield Wealth