That was quite a rally yesterday. A big drop in
new unemployment claims, some pretty good retail numbers from February,
and some hope that the Libyan situation may be nearing an end, bolstered
the good vibes from Wednesday’s ADP private payroll report and sent stock
flying higher.

The entire “Apple Complex” of stocks did pretty
well, too. So you know, I’m using the term “Apple Complex” to refer to
this entire sector of tech stocks, like chip stocks Qualcomm
(Nasdaq:QCOM) and Nvidia (Nasdaq:NVDA), carriers like Verizon (NYSE:VZ),
data traffic companies like Akamai (Nasdaq:AKAM) and F5 Networks
(Nasdaq:FFIV) and wireless app companies like NetFlix
(Nasdaq:NFLX).

There are plenty more that could be
included.

The “Apple Complex” is an open-ended growth story.
When you start to imagine the potential of global penetration for this
new generation of devices and services, you can get some pretty
staggering numbers. That means we can use these stocks as bullish
indicators.

When investors are feeling bullish, and imagining
upside stories, these stocks will rally. When investors feel bearish,
these same open-ended growth stocks will suddenly see their valuations
called into questions and will sell-off hard.

I don’t think the Fed would know what to do if
employment really started to pick up. Clearly, that would force Bernanke
& Co. to reevaluate their low interest rate, QE2 environment. And
it’s clear that the Fed doesn’t want to do that.

I think the market knows this, too.

The best case scenario is a gradual rise for
Non-Farm Payroll and a slow reduction of the unemployment rate, which we
also got. I suspect that the market can rally with this data, even after
yesterday’s big move.

*****When oil prices run like they have lately,
you start hearing some pretty extreme opinions. You get calls for $220
oil, like the one from Nomura Securities. And you get others who say
that’s nonsense, like Oppenheimer oil and energy analyst Fidal Gheit, who
says that even if unrest spreads to Saudi Arabia, oil will only rise to
$120-$130.

Frankly, $130 a barrel seems like an awfully small
move for something as potentially destabilizing as revolution in Saudi
Arabia.

Now, Libya produces 1.7 million barrels of oil a
day. And Brent crude oil prices have jumped around 19% since Libya
descended into chaos. It’s estimated that Libya is now producing 1
million barrels a day.

If we extrapolate that out to Saudi Arabia and its
8+ million barrels a day of supply, well, I think the situation becomes a
bit more frightening. Saudi Arabia is really the only country that has
the ability to increase oil supply. But there’s no way to know if Saudi
Arabia can actually start pumping an extra 4 million barrels a day, as it
claims.

And if current Saudi production were cut in half,
like Libya, we’d be talking about losing another 4 million barrels a
day.

That would drop total global production to around
84 million barrels of oil a day, from current levels around 88 million
barrels, as this chart from the International Energy Agency (IEA)
shows… 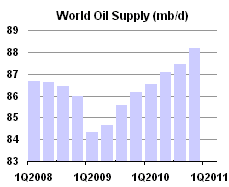 But with oil demand around 90 million barrels, it
seems to me that oil prices could, and almost certainly would, ramp
significantly higher than $130 a barrel. 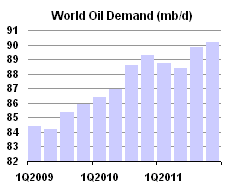 Still, this analyst counters by saying: